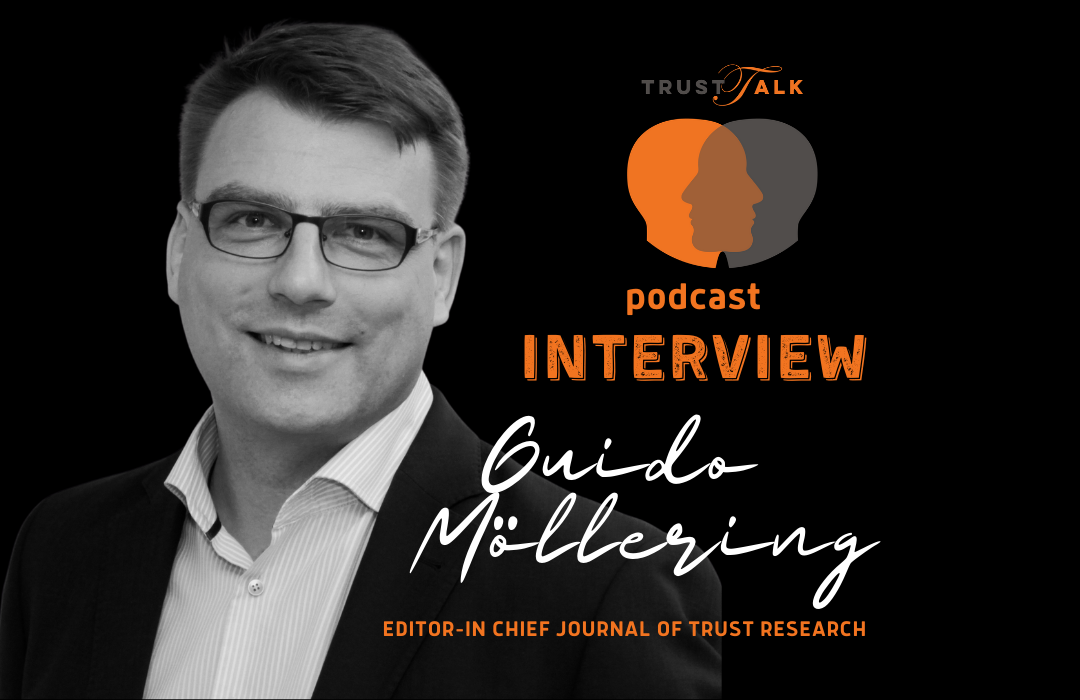 The Research Challenge of Trust

Interview with professor Guido Möllering, director and Chair of Management at the Reinhard Mohn Institute at the Witten-Herdecke University (Witten, Germany) and editor-in-chief of the “Journal of Trust Research”. In the new episode of the TrustTalk podcast, he reflects upon the question of whether trust is a useful subject for research as it is so elusive and hard to define? He talks about his 2006 book “Trust, Reason, Routine, Reflexivity“. Inspired by the German sociologist Georg Simmel he reflects on trust as the ability to believe in someone without being able to really say what it is you believe and. About trusting versus trust and how pharmaceutical companies and the  HIV/AIDS community finally got to trust each other. About the “trust gap” where longtime business partners like Apple and Qualcomm and Microsoft and Intel had to readjust their relationship, once very successful but went sour because they realized too late that their relationships had become locked-in.

Opening question by the host of the TrustTalk podcast, Severin de Wit

At the start of this interview, I would like to use a well-known story, that of the Eagle and the Lion. An eagle flies over a lion’s cave, the lion welcoming the eagle, offers him some fresh food. And the eagle wants to be friends with the lion to get this food more often and offers the lion an alliance.

The lion then said: “My friend, it sounds good to have an alliance with a powerful bird like you but how can I trust someone who has the privilege of flying away from the situation any time?” To me, this sounds like a quintessential problem with trust. Everyone feels what it means, and the concept gained increasing popularity across the social sciences, but it remains elusive. Its many facets and implications obscuring a clear overall vision of its essence. What’s your view? (listen to the reply of Guido Möllering in the podcast interview: https://pod.co/trusttalk)

On Trust Research and the Definition of Trust

“I think that has been an important question for all of us struggling with the definition. It has even been subject to a debate with Williamson, like should we even use the word trust in research because we’re not really sure what it means? So I think that’s a very important discussion and it’s still ongoing. By now, nobody has kind of caught the eagle and chained the eagle to the ground so that it can’t escape anymore. I think sometimes while I myself tried to pin down trust, sometimes I think it’s also helpful to be clear what trust is not and to kind of clearly distinguish it from other things. For example, that trust is not calculation or the same as calculated risk-taking, that it is not simple, routine or rule-following or just a matter of habit. It’s not a soft form of control. It’s something beyond that. And sometimes I think the lack of clarity has to do with the fact that we confound trust with other things. And just to clarify how trust is related to these other things, we get a clearer those still kind of obscure picture of what trust really is. And also, it’s important to be clear when trust actually matters and under which circumstances it may matter less. For example, if preconditions like vulnerability and uncertainty are not very present, then trust is also not so relevant. So we shouldn’t bring in trust as an important factor in situations when other mechanisms can serve us just as well. So I think it remains elusive. And that’s why sometimes it’s even more important to ask what trust is not than to just try to have the perfect definition.”

About his learning from the German Sociologist Georg Simmel

“And I picked that up from Georg Simmel, the German sociologist who more than 100 years ago wrote that trust means to believe in someone without being able to really say what it is you believe. And that trust is somewhere between knowledge and ignorance, and that was one important thought that I had already picked up before the book and then for the book, I tried to kind of sort out and map the landscape of thinking about trust. And one approach to trust is very calculative, which is a rational choice approach. And if you look at all that literature, which I summarize as the routine part of trust literature, it actually explains a lot. But at the end of the day, calculations don’t explain trust fully. Then we have the more sociological approaches. Let’s think of Garfinkel and others who explain trust mainly as a routine following, as something that is embedded in roles that we just fulfill, but also that doesn’t really lead us all the way, because even with all the rules and roles and routines that we have, there always remains the possibility of being disappointed. And we somehow have to be able to live with that, or even if trust is a matter of learning or reflexivity and where we gradually find out how much and how we can trust people, it’s still that learning process that is ongoing.”

On Trust in Vaccines:

“It’s very important that when we talk about trust in vaccines or let’s say in machines, in non-human entities, it’s important to clarify whether that’s actually meaningful, because the vaccine as such is not an actor that is benevolent to me personally or not, you know, or my car, when I get my current morning, I don’t really have a trust relationship with my carr in the sense that the car decides whether it starts or not, depending on how it feels towards me that morning, you know, and also the vaccine the liquid that is injected into my arm, it’s not what I trust. I trust the person injecting it and I trust the person ordering it to be injected and I trust the person developing it and selling it for those doctors to actually use. And so we are really with vaccines and the like talking about system trust here, where we are looking at various responsibilities as a network of actors almost, that are involved in making sure that the product is safe or not safe. And so I would encourage us to really look at the web of relationships that we have here. And finally, again, when we use the word trust in this context, it is clear already by using this word that we don’t have perfect certainty.

It’s not perfectly safe, but we have a choice between making the type one or type two error, type one being I’m not trusting a vaccine that is actually safe or I’m trusting a vaccine that is actually not safe. And we have to decide which of these two errors is worse. And in trust research, generally, we come to the conclusion that it is better to try trust and find out that it wasn’t deserved and then to stop the relationship, then do not even try and risk trusting, mistrusting something that is actually trustworthy. And I think I personally would recommend with the vaccines that after they have gone through all kinds of control processes and have been supported by authorities, then from a patient or citizens point of view, I think it’s worth trying something that might turn out not to be as safe than to not try it at all. I know this seems harsh because it’s a matter of life and death, but what I really wanted to illustrate is that trust can go wrong, but distrust can also be wrong. And it is a very important question which kind of error we risk and which one we don’t. If we talk about pharmaceuticals and pharma and stuff, you also refer to an interesting study on trust as a process, the relationship between trust and identity. They analyze the relationships between pharmaceutical companies and HIV/AIDS community organizations in Canada. What does that study illustrate?”

Literature mentioned in the interview:

Handbook of Advances in Trust Research

Diego Gambetta, Can we Trust Trust?

Garfinkel began developing his famous Trust argument, that a minimum of equality and reciprocity he called ‘Trust Conditions’ is a prerequisite for sense-making in interaction, while working with Parsons from 1946 to 1952. The argument grounds a social justice approach to social order and meaning with affinities to Durkheim’s ‘implicit conditions of contract’ and Du Bois’ ‘double consciousness’.

The full transcript of the interview:


The full interview can also be watched as a video with subtitles, on the TrustTalk YouTube channel How the Digital Age Transformed Trust in Copyright