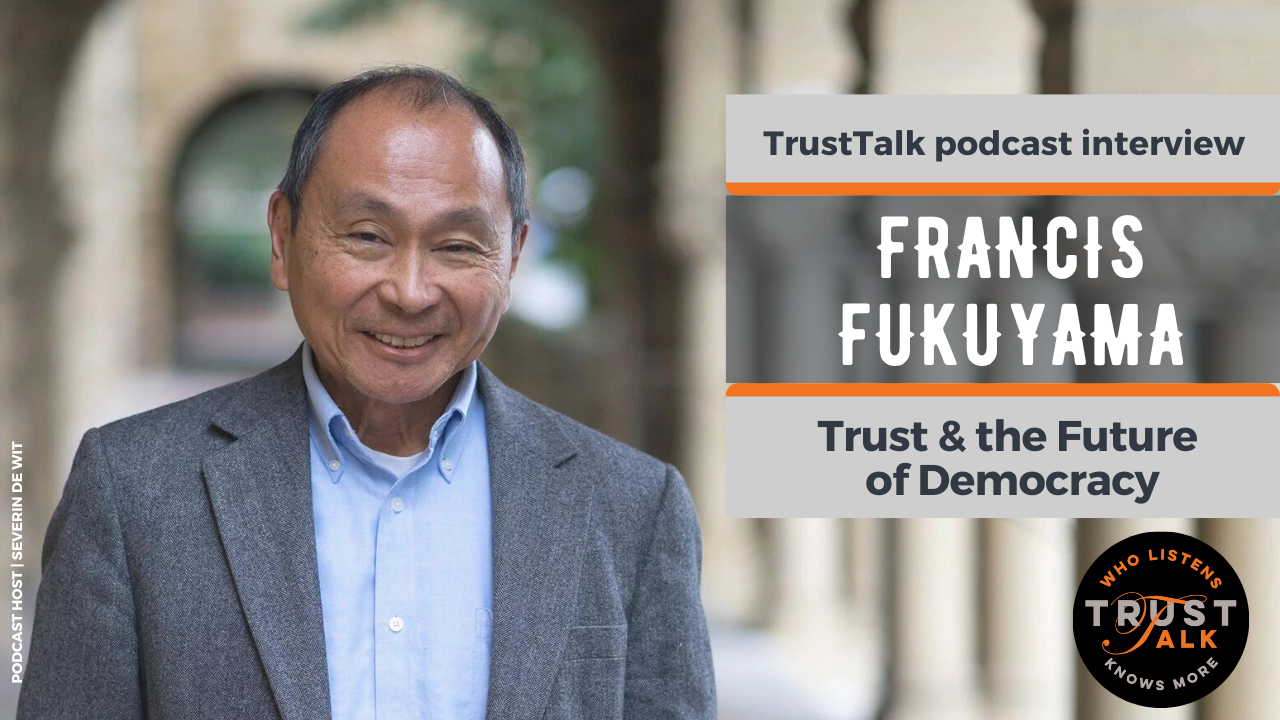 Interview with Stanford Professor Francis Fukuyama about Trust and the Future of Democracy. In the limited time we had, we covered a whole lot of subjects. He is a much sought-after expert and a prolific writer. The New York Times wrote about him:

After a dalliance with postmodern literary theory at Yale, he transferred to Harvard’s Ph.D. program in government, where he wrote a dissertation on Soviet foreign policy in the Middle East. Early in the Reagan administration, his friend and fellow neoconservative Paul Wolfowitz hired him at the State Department’s Office of Policy Planning. It was during a later stint there, in the George H.W. Bush administration, that Fukuyama wrote “The End of History?”, which was originally delivered at an academic conference organized by Bloom.

Published in the journal The National Interest with commentaries by a half dozen leading figures, the essay (which was grounded in a reading of Hegel’s abstruse philosophy of history) landed like a bombshell, “outselling everything, even the pornography,” one Washington newsstand owner reported. For some, it was one of the most important foreign policy essays since George Kennan’s famous “X” article, which called for the “containment” of Soviet Communism. For others, it was dangerous Cold War triumphalism.

In any society, you have formal institutions that establish things like property rights, rule of law, a commercial code and so forth that promote economic activity. But really, you need things in addition to that, which is interpersonal trust. That is to say people have to believe that they’re partners in any business enterprise, are going to be honest, reliable, perform as they have promised. You can try to compensate for a lack of trust by writing contracts that are very detailed, that specify all of the conditions that your business partner has to fulfil and if they don’t fulfil it, you can take them to court and sue them and so forth. These all add up to transaction costs that make business dealings much more costly, slow, difficult and sometimes impossible. So therefore, if you live in a society in which people are basically honest, they keep their word, they can do things on a handshake rather than having to write out a detailed contract, you’re going to have a more efficient economic transaction and therefore greater overall economic efficiency. So there’s this informal side to any economy that is also as important, I think, as the formal institutions.

“Russia, along with China, have been putting forward an argument that liberal democracy is an obsolete system. It doesn’t work, it’s not delivering for its people, and that their authoritarian governments are more effective in doing that. And I think that if Putin is defeated in Ukraine, it’s going to prove that he’s actually not this clever strongman that knows what he’s doing, but he’s actually an incompetent fool that’s also violating human rights, causing damage on an unimaginable scale. And that is obviously going to reduce the appeal of that kind of strongman politics. So I do think that the conflict in Ukraine is going to have consequences that go far beyond Ukraine itself. If he’s successful in grabbing part of Ukraine and holding onto it and incorporating it into Russia, it’s going to validate other countries doing that. The one that obviously people are worried about most is Taiwan or China has territorial claims on it. But there’s others in other parts of the world and we’re already seeing violence in Central Asia, you know, between Azerbaijan and Armenia. So there’s a lot of stimulus that a successful Russian attack on Ukraine is going to have for these other conflicts.

Francis Fukuyama is a prolific writer, for an overview, see “Articles and Book Chapters” and “Books and Monographs“.

Here is the English transcript of the interview (French and German transcripts are available upon request):

The interview with subtitles in English, French, German, and Spanish is published on the YouTube TrustTalk channel.