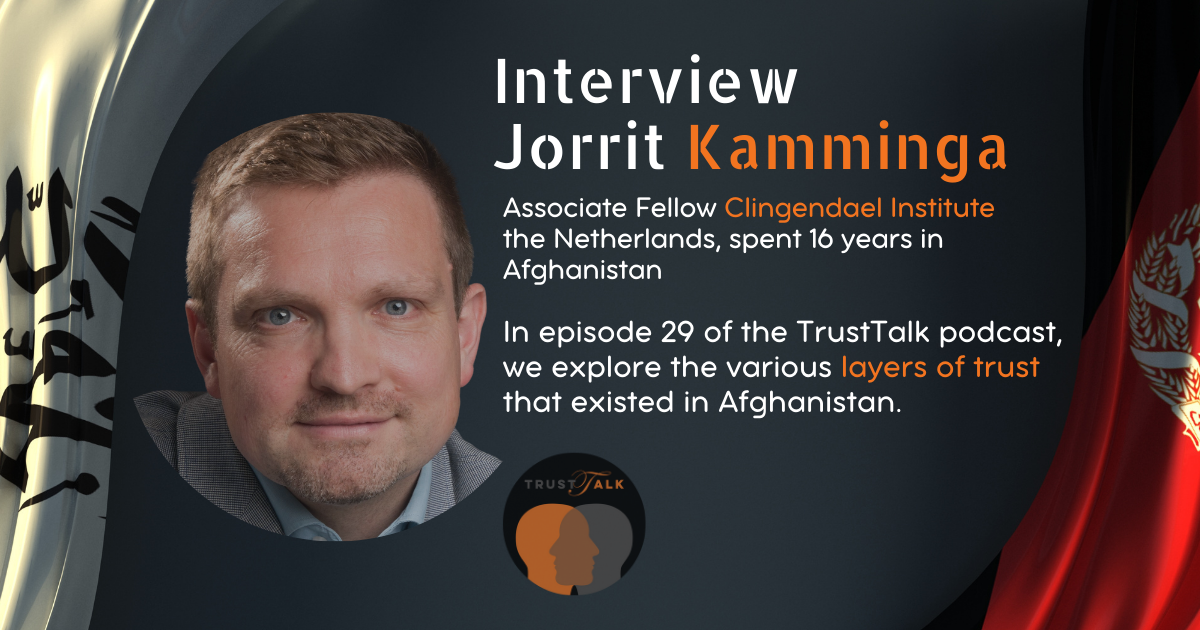 Afghanistan has been all over the news in the past weeks. The reason was far from positive. The Taliban unexpectedly returned to power, just at the time that the last international troops were being withdrawn from the country. The final chapter of twenty years of international engagement became the most tragic one, as countries tried to evacuate their citizens and the Afghans that had worked for them. In TrustTalk we talk to Jorrit Kamminga, an associate fellow of the Dutch Clingendael Institute who spent 16 years in Afghanistan and has recently published a Dutch book about twenty years of the Netherlands in Afghanistan. With him, we explore the various layers of trust that existed in the past twenty years. From the national parliaments of donor countries and the international military coalitions to the Afghans on the receiving end and the new interim government of the Taliban.

On the interview question: “The withdrawal of the US and its Western allies from Afghanistan and the consequences that may have on trust by Europe and Asia, let’s think about Taiwan and the disputed Japanese Senkaku Islands, the trust they have in their US ally. EU High Representative for Foreign Affairs and Security Policy Josep Borrell Fontelles wrote in an opinion piece in The New York Times, and I’m quoting him, “any partnership needs capable allies and political trust.” So my question is, can we still trust the US as an ally?”,

I think in recent years, the Trump administration has been a big wake-up call right for Europeans. And you now see that the Biden administration is basically continuing many of the policies of Trump. Like just look at the migration policies, for example, and you can also see it in the recent deal, the US, Australia and the UK signed, which I think was also quite a surprise for many people. And this was the deal about strengthening stability in the Indo-Pacific region, as China is expanding its military might and influence there. So that in a way was a message to China, primarily, but there is also a message in there for the European Union and for NATO that basically says, like, we don’t really need you to advance on our collective security. So can we still trust the U.S.? Well, I guess, yes, of course, I hope, yes. And we should continue to trust the US because we continue to be dependent on the US for our military and security missions abroad. And that is also the biggest story I think of the past 20 years in Afghanistan. And you also saw it in the recent reactions after Biden got elected. The reactions from NATO and the European Union were immediately inviting basically Biden to rebuild transatlantic relationships, transatlantic ties because we think that these ties are important, that they matter. So that means actually that we need to trust each other. There’s simply no choice and in Afghanistan, we’ve recently seen it also in the evacuation efforts. There was a strong dependence on the US there. And yeah, we’ve always depended on the US. So I think it’s quite also ridiculous to suddenly hear people talk about, for example, the need for a European army. We’ve seen that in recent weeks. Well, there’s probably a real need for a European army in terms of efficiency, etc. But you should have started to talk about that 20 years ago, and not at the end of one of the longest international missions in Afghanistan.

Listen to the full interview on the TrustTalk podcast website, or on all major podcast platforms, or, bleow, on Apple Podcasts or Spotify

See transcript of the interview: