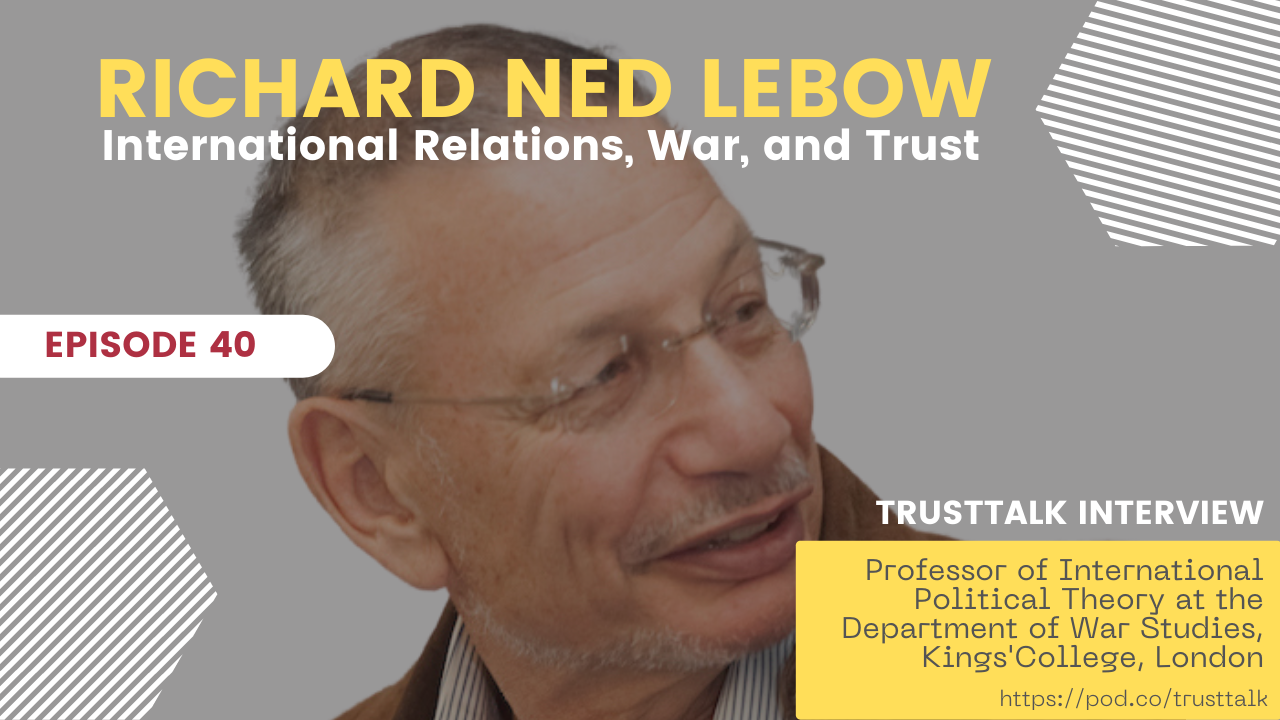 Lawrence Freedman begins his Strategy: A History with a discussion of chimpanzees, noting how research shows them to be political and strategic, using cooperation and coalition-building, deception, rewards, and occasional instrumental violence in managing and limiting their conflicts. It was evident that competition had to be limited because there would be moments where the same chimpanzees would need to join forces for the greater good of the group. The chimps had to kiss and make up after fights and, as Freedman observes, by ‘showing their vulnerability they invited trust’. Trust, or its absence, is a key feature of political and social relations.

This is how the article by Richard Ned Lebow, “Trust and International Relations” (published in a book: “The Art of Creating Power: Freedman on Strategy” starts.

Trust is a central concept in domestic politics and international relations literature. In the latter, it almost invariably applies to judgments about other actors: will they prove faithful allies, will they adhere to their treaty and other commitments, do they have benign intentions? These questions are critical, but surprisingly little work has been done on how policymakers reach these decisions and how they ought to. I further contend that trust has a wider application to international relations. It describes the belief policymakers have in their own judgment, the efficacy of their initiatives, and their ability to control or influence others to bring these initiatives to fruition. These beliefs are often misplaced and there is a large literature on this subject, much of it drawing on the work of cognitive and motivational psychology.”

In episode 40 of the TrustTalk podcast, we interview Professor Richard Ned Lebow about the role of trust in international relations and diplomacy. He is a Professor of International Political Theory in the Department of War Studies, King’s College London (part-time), and James O. Freedman Presidential Professor Emeritus at Dartmouth College. He is also a Bye-Fellow of Pembroke College, University of Cambridge. He has taught strategy and the National and Naval War Colleges and served as a scholar-in-residence in the Central Intelligence Agency during the Carter administration. He has held visiting appointments at the University of Lund, Sciences Po, University of Cambridge, Austrian Diplomatic Academy, Vienna, London School of Economics and Political Science, Australian National University, the University of California at Irvine, University of Milano, University of Munich and the Frankfurt Peace Research Institute. He has authored and edited 40 books and nearly 300 peer-reviewed articles and book chapters. He is a Fellow of the British Academy.

The Role of Candor in Diplomacy

So if we look at how the most serious conflicts that are resolved peacefully get resolved, it’s in part through candor. So let me just give you three historical examples. Britain and France, which almost went to war in 1898, ultimately through diplomacy, became good friends and allies. Egypt and Israel resolved their differences. So war receded, although they certainly don’t have what one would call friendly relations. And the Kissinger Mao Tse-Tung, Chou En-lai, Nixon negotiations led to a very serious improvement in Sino-American relations. In each of these conflicts, it was necessary for both sides to convince the other that they wanted accommodation and to live in peace, and to act in ways that not only express their candor but put their cards on the table and demonstrate it. And those gestures, which ultimately became reciprocal, pave the way for these accommodations. So candor is a very important part of international relations, and it’s only a certain brand of a crazy realist who thinks that all ethics stops at the water’s edge and has no role to play in international relations. In a book I published in 2020 with Cambridge University Press called “Ethics and International Relations, A Tragic View“, I made the case that ethical behavior is appropriate to international relations, not on any moral basis, but rather because I could demonstrate empirically that if states behaved in accord with what we’re seeing as the conventional ethics of the day, their policies were more likely to succeed. And when they violated those norms, their policies were less successful. So as a purely practical matter, I think I can demonstrate historically how relevant ethics and candor are to international relations. Now, this doesn’t mean that every moment of the day that one should be completely candid. We don’t do this in our personal relationships, either. You know, occasionally we tell in English what a call, I mean if one can still use the term these days, “white lies”, you know, little lies, which we do so often to avoid embarrassing ourselves or other people. That’s a very different kind of proposition.

Listen to the full podcast interview:

Full transcript of the interview

Here is the full transcript of the interview with Ned Lebow

If you like our podcast, please subscribe so you will be informed of future episodes on trust.