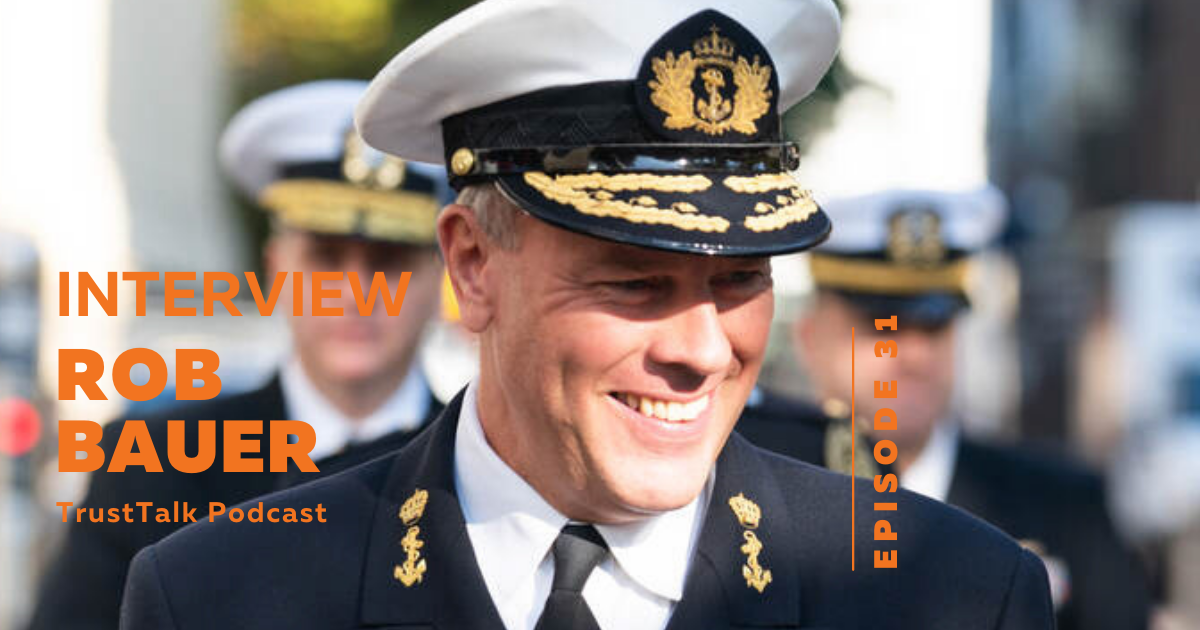 Admiral Rob Bauer is NATO’s most senior military officer.  In his first podcast interview he talks about the crucial role of trust in the military training and operations, about his years at the Naval Academy and the international retreat from Afghanistan, about “mission command” and his personal mantra “Expect the Unexpected”. He speaks of military personnel as highly educated and trained professionals, who do not conform to popular stereotyping, about ethical choices in combat and the difference between trust and performance.

About trust in military training, exercises and operation

Admiral Bauer: “The interesting thing in the Naval Academy, which is the place where we have conduct officer training in Den Helder, in the north of Noord Holland, there’s a mantra which is basically above the door when you enter the Naval Academy and it is in English: “Knowledge is power, but character is more”. And in Dutch: “kennis is macht, karakter is meer”. And so trust is related to character, very much. And during the years at the Naval Academy, that was basically ingrained in all of us. And the reason why trust is so important is that in battle in a war if you don’t do what is agreed or if you don’t do what the procedures are, it is actually the difference between life and death. And so you have to trust your mate who is next to you, who is looking after you as you are looking after him. And that is based on mutual trust and leaving no one behind in the battlefield, even when they are wounded or killed is part of the same trust.”

“Mission command is that you do not say what people have to do, but you have to explain to people what they have to achieve. So the purpose and the goal is basically what you talk about and the way people reach that goal is actually less important. But you have to give guidance and direction and guidance within which they can move to achieve that goal. And this is very important and it comes basically from the old days. You have to imagine that when a ship left the Netherlands in the 17th century to conquer, for example, a nation somewhere in the world, the captain of the ship opened his orders at sea and then read, “go to – what is now South America, go to Brazil – and conquer this particular city. Then he went to that particular place. The voyage itself was difficult and people got sick etcetera. So when he then arrived at the place, he then saw no Brits, but Portuguese. Am I still to conquer the place? Well, the order was to conquer the place. That was the goal, whoever is there. So then the captain of the ship did what he was ordered, came back to the Netherlands and then was decapitated because we actually had a treaty with the Portuguese that didn’t allow for that to happen. So you can have a problem with mission command.”

His mantra: “Expect the Unexpected”

During the interview, the podcast host, Severin de Wit, asks Admiral Bauer if he is familiar with the popular Kung-Fu series from the 1970s. When two young warriors, Kwai Chang and Ho Fong, tell Master Kan that they have been robbed by a man, quote, “with a kind face and a gentle manner”. Master Kan asks what they learned from the encounter and then Hong Fo, one of the two guys, responds: “never trust a stranger”. Master Kan sends him away. He then asks Kwai Chang the same question, who then says: “expect the unexpected”. After which Master Kan replies: “deal with evil through strength, but affirm the good in men through trust. In this way we are prepared for evil, but we encourage good”.

The interviewer then asks: “Does that in any way come close to your thinking about “expecting the unexpected”?

“But there’s another meaning to me as well, because if you look at Sun Tzu’s “The Art of War”, it’s a military theorist, Mr. Sun Tzu, who said “speed is the essence of war and take advantage of the enemy’s unpreparedness, travel by unexpected routes and strike him where he has taken no precautions”. So the thing in military operations is that we have to think in terms of risks. By definition, you will never know enough of the enemy to be sure of success in battle. So if after one day of war, 30 percent of the people is dead, 40 percent of the material is broken and you’re almost out of ammunition. Then you can either surrender or if you don’t want to do that, you cannot stop the war because of the fact that it becomes too risky. So the second day of the war will come and there trust comes into play because your whole brigade, battalion, crew of the ship, squadron will know that as well, that the risks are going up. And why are they still following you? First of all, for the higher goal, which is to defend the nation or to and that’s important. That’s very important. But in the end, it is very often much smaller because it is they look at their commanding officer who they hopefully trust, and he will then say, follow me and they will go into the next day of the war. This whole concept of thinking in terms of risk is difficult in a society, which is almost a zero-risk society by now, in our present society, where we actually do not accept any risk anymore. And the pandemic, the COVID-19 pandemic has shown that there are still things that you cannot prepare for, that there are still things that basically are suddenly there, like droughts, like wildfires, like terrible storms, things that are, you know, are uncontrollable. And still, you then have to deal with them. And the military, the role of the military in the COVID-19 pandemic was very often to restart organizations again, in hospitals, in care homes, in food banks. Because basically, with all the regulations and rules that are there in our society and control mechanisms and what have you, there’s a very little path on which they can walk and do the work. And suddenly there were basically not on that path, but they were next to it and they said, we can’t do our work anymore. And then we came in and said, so where do you want to go? You’re there. Ok, then go there. Yeah, but that’s not on the path, yeah, forget about the path. It’s a crisis. Do it, because that’s what we do in a war. There is no rules. There is no plan. There is chaos. And in chaos we have to function. And that’s basically what we did. We took them by the hand and we started walking. And then after a while, they thought, hey, it’s actually possible, there’s no one arresting us, there’s no one, we don’t have a fine because we’re not on this little path. And we and then we said, good luck and we went to the next hospital or the next care home or the next. So that skill is, something we know and we have to know because of the nature of war.”

Listen to the interview on the TrustTalk podcast

On his mantra “Expect the Unexpected” (with French subtitles, avec sous-titres français): The Trifecta of Trust Trusted Leadership, the 8 Pillars of Trust