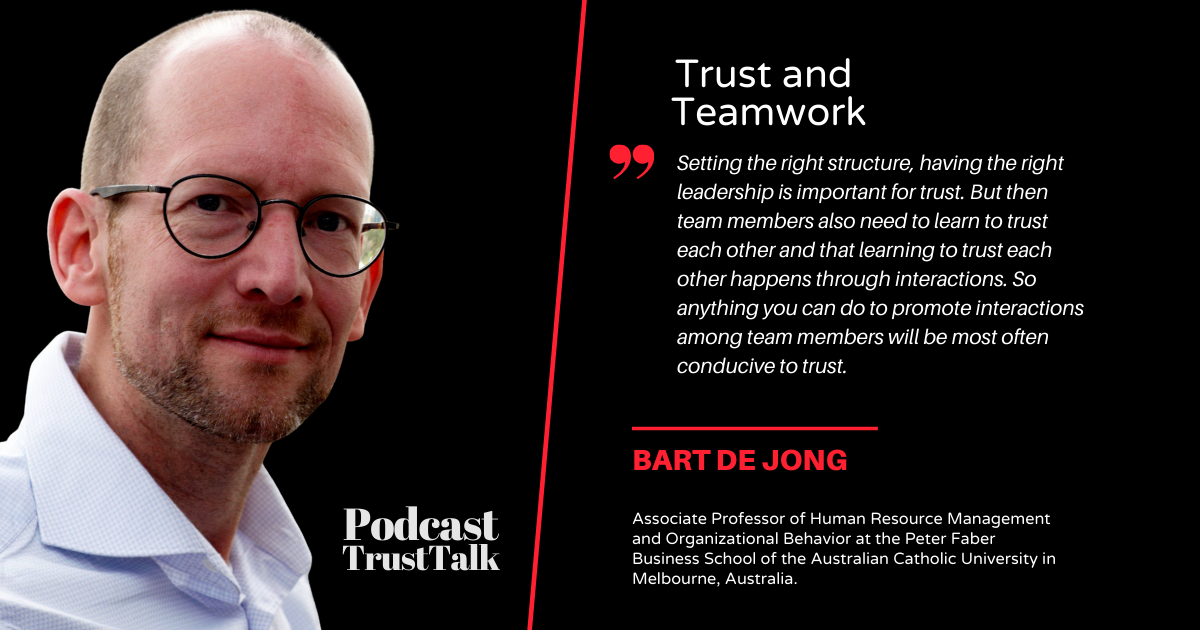 Trust is Key in Teamwork

In this 28th episode of the TrustTalk podcast, we interview researcher Bart de Jong. After earning his PhD in 2010, and working at the VU University Amsterdam for over a decade, he started 2017 his current position as Associate Professor of HRM & OB at the Peter Faber Business School of the Australian Catholic University (ACU), Melbourne campus. His research mainly focuses on trust, teams, and the combination of both. His work has been published in scholarly journals such as Academy of Management Journal (AMJ), Journal of Applied Psychology (JAP), and Organization Science, and several of his conference papers have appeared in the Academy of Management (AOM) Best Paper Proceedings. In 2014, he received a three-year early career grant (VENI) from the Dutch Research Council (NWO) to pursue his research interest in trust asymmetry in teams (similar to ARC’s DECRA). He currently serves on the Editorial Review Boards of AMJ, JAP, and Journal of Trust Research, and received two Outstanding Reviewer Awards from the former journal.

In this podcast interview, he focuses on the impact of trust on teams in organizational settings, about the difference in hierarchy or rank among team members. Trust building in a team should not be a one-off exercise but an inherent element of every interaction, every day. He talks about three ways managers can have control over that they can use to build and maintain trust, about differences in online and face-to-face team meetings. He researched three waves of trust research, spanning a period of more than 25 years.

On Trust and Team performance

I would say my findings were kind of threefold or I looked at three questions. And one of the things that I found is that the impact of trust on team functioning and performance depends in part on not only the overall level of trust, so how much trust is there within the team among team members? But also, do they have a shared sense of trust? So you can imagine a situation where, for instance, some of the team members have trust in each other, but others have not. And this is something I call trust asymmetry. And one of the things that I found in my dissertation is that the overall beneficial impact of trust among team members is lessened or hindered if there is this asymmetry. So that’s one finding. Another finding is about how trust or through which kind of mechanisms trust impacts performance. And I found that it does so through various teamwork behaviors. In other words, the reason why trust is beneficial for performance is that it allows team members to interact and cooperate in more productive ways. And that’s why it impacts team performance.

On the question: “what are the three top to-do’s for any organization to create a team spirit through trust?”

Trust is a complex topic and it’s potentially impacted by a whole laundry list of factors that you would need to take into account. But if you want to twist my arm and want to kind of a shorthand answer and also an answer that’s relatively robust in terms of being underpinned by scientific evidence, I would say the following. First, there is all these kind of team-building interventions and training programs that organizations spend a lot of money and time on, and that sometimes can show, you know, to have a beneficial effect in terms of trust-building. However, my advice would be because that’s just a one-off intervention and that that effect might wear off quite quickly over time. So instead of this one-off external intervention, I would instead recommend to kind of not make trust-building a separate activity, but make it an inherent aspect, an inherent element of every interaction and in the way you design your organization such that it’s it kind of help to build and maintain trust every day.

And not just this, you know, through this one-off kind of intervention. And so to do that in again, a meta-analysis that I’ve I’m currently involved in, I’ve basically found three what you would call levers three ways three factors that managers can have control over and that they can use to build and maintain trust. And one is through their leadership. So leaders quite often have a role-modeling function. And team members look at leaders, you know, how does that leader behave, how they try to get a sense of does the leader trusts this team right? And what are the signs? What are the signals that the leader is sending that kind of evidence this trust that the leader has in the team? And so I think one important factor is, is the leader themselves, how are they interacting with the team? How are they signaling that they trust the team? So I think that’s one hugely important factor.

Listen to the full interview. Go to podcasts (above on this blog), or go to: https://pod.co/trusttalk. The podcast is also on all major platforms (Apple Podcasts, Spotify, Google Podcasts, Acast,Tuneln, Pocket Casts, Deezer, Amazon Music,