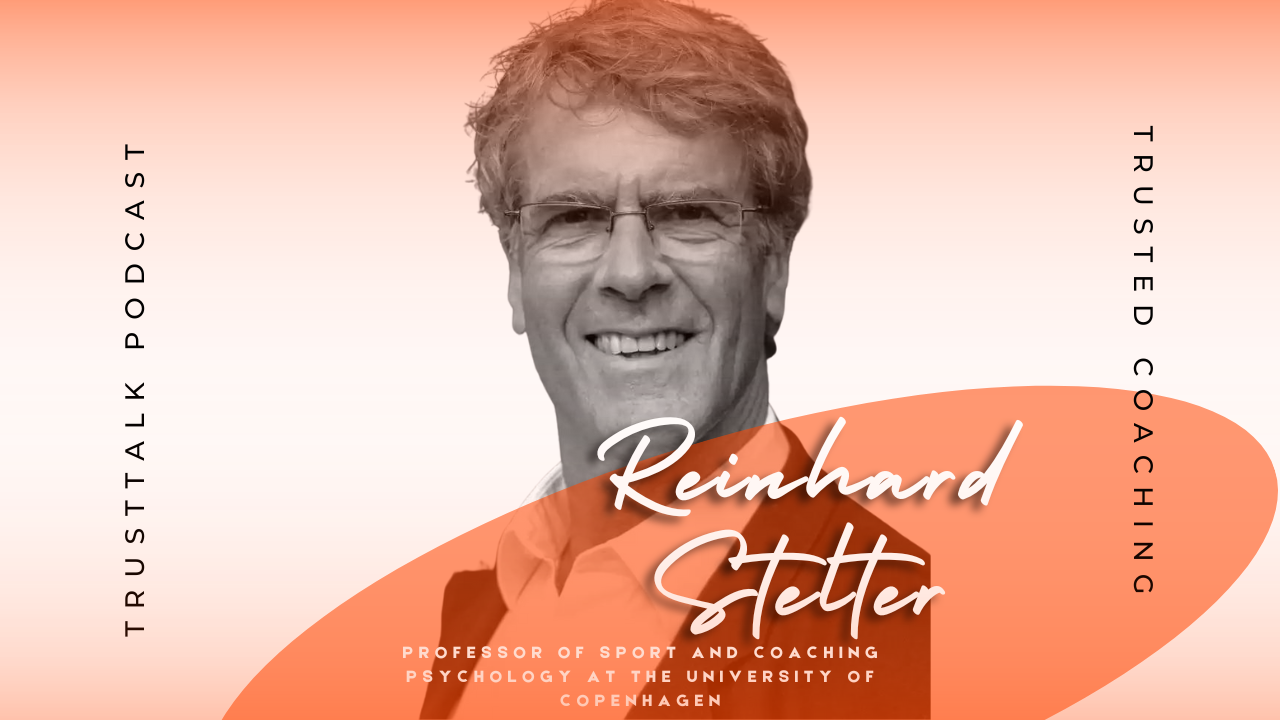 Coaching is the most potent tool to achieve positive personal change. I am talking about a new third-generation coaching approach with Reinhard Stelter, Professor of Sport- and Coaching Psychology at the University of Copenhagen, Denmark. He advocates a new form of coaching as a transformational dialogue, one that fosters trust between the coach and the dialogue partner by a more relational “attunement” or resonating with the coaching partner.

In his TrustTalk interview he talks about his move from performance-oriented sports psychology towards developing coaching as a transformational dialogue where trust is the foundational premise. The focus is on developmental issues, where clients or dialogue partners struggle with themselves or specific challenges they are faced with. The perspective of “dialogue coaching” can be described as fellow-human companionship: dialogue guides – a professional coach or colleague or a friend – support their dialogue partner by including themselves in the dialogue as a collaborative and co-reflecting partner.

I think one of the elements is what I would call relational attunement. So it’s really something where you tune into another person and this is the basis for developing trust, that you meet the person, the other, your dialogue partner, in a relationship where there is a possibility for the other to reflect on something, to feel a fundamental acceptance for everything the dialogue guide meets in the other. Also, I’m inspired by a term from John Shotter, a communication research and practitioner who used the term “Withness Thinking” or “Withness Talk”. So and this way of relating to another person is actually the foundation for developing trust.

“Withness (dialogic)-talk/thinking occurs in those reflective interactions that involve our coming into living, interactive contact with another’s living being, with their utterance, with their bodily expressions, with their words, their ‘works’. It is a meeting of outsides, of surfaces, of two kinds of ‘flesh’ (Merleau-Ponty, 1968), such that they come into ‘touch’ or ‘contact’ with each other. …

In the interplay of living moments intertwining with each other, new possibilities of relation are engendered, new interconnections are made, and new ‘shapes’ of experience can emerge.” (p. 600)

The Art of Dialogue in Coaching

And we as a dialogue guide, the coach, are actually able to be giving resonance to something and really see something also through our eyes. It was actually quite an experience for me because I used in “The Art of Dialogue”, in coaching, I used the term “resonance”. And later on I noticed that a German sociologist by the name of Hartmut Rosa has actually published a book which has the title “Resonance”. It’s translated to English also in 2019. And I mean, he approaches actually that we live in a society of growing acceleration. He describes it in the way that if acceleration is the problem in many fields, technologically, individually and in social processes, if acceleration is the problem, resonance might be the solution. And he hasn’t really focused very much on dialogue. But I use this term resonance to really show how we in this process of resonating with another person, can develop trust, can develop growth in our relationship, in that sense. So from this perspective of resonance, the term is also very fundamental for leading a good and trustful, or building a good and trustful relationship.

From his book “The Art of Dialogue in Coaching”:

Through the dialogue the interlocutors develop a shared reality by listening to and exchanging ideas, thoughts and experiences based on their individual understanding and meaning-making. The concept of withness-talk or withness-thinking seeks to describe this intense meeting with the other (followed by the quote of Shotter mentioned above)

and then there is also the term being a witness for the other or “witnessing”:

it was crucial for the coach to be present as a fully engaged dialogue guide. Sometimes, the coach or other members of the group will provide feedback to the statements made in the dialogue. This is where the appreciative perspective takes form. As a dialogue guide the coach acts as a withness-thinking and responsible dialogue partner who relates to what the other says. In narrative thinking, this is called witnessing (see White, M. (2007) Maps of Narrative Practice, New York, NY. Norton, Carey, M. & Russell, S. (2003). Outsider-witness practices: some answers to commonly asked questions. The International Journal of Narrative Therapy and Community Work, 1.

I’ve tried to develop coaching further. In the old tradition of coaching, I was a neutral person as a coach, and I think what is important for me is that we develop ourselves as a dialogical guide or coach. Dialogues can happen in very many situations, not just in coaching, but we can be inspired by dialogical coaching so that we really work towards being a fellow human companion in the dialogue. And this companionship is actually what builds trust, that the other can see that we are not perfect, although we have a professional role and this fellow human companionship is actually something which makes our coaching partner, our dialogue partner, more open for reflections that we also try to as a dialogue guide or coach, that we include ourselves in the reflective process so that it becomes somehow a collaborative process or a co-reflective process that I include myself in that sense that I say, you just talked about this and this, and this reminds me of a situation where I’ve been in and I’ve tried to unfold something and I do this to be a servant for the other. This is important. I do not include myself as a dialogue guide to just tell something about my life. I do it with the intention to support the other, and this is also something which really develops trust in specific abilities also in the other.

When I talk about transformational dialogues, I think we can, as friends, as leaders, as colleagues in organization, also fulfill the role of a transformative dialogue partner. So in that sense, it’s not necessarily bound to a situation where you go to a professional person, you can have it with your spouse, you can have it with friends and colleagues. What is important is really to be aware of not imposing anything onto the other, because the starting point for a trustful relationship is to be acceptant, to accept the other person, to be in a state of acceptance of the other.

I actually read about David Bohm in a later book, which was published by William Issacs. The book is called “Dialogue and Art of Thinking Together“. William Issacs describes actually when he was a young scholar, he was actually working together or was invited to these conversations. I think how David Bohm was interested what he was interested in was really to go from this material world to a more spiritual perspective. They found out that suspension was actually the basis, and this is a different position than, for example, the position of defence. If you defend your position, then it will not become a trustful relationship. Then you are put into another position. And I think as a transformative dialogue guide, you need to suspend your own position and you don’t impose the other. So suspension means that you listen without resistance and that you somehow identify yourself with the position of the other. And this leads to reflective dialogues as a difference to skilful conversations

Transcript of the Interview with Reinhard Stelter