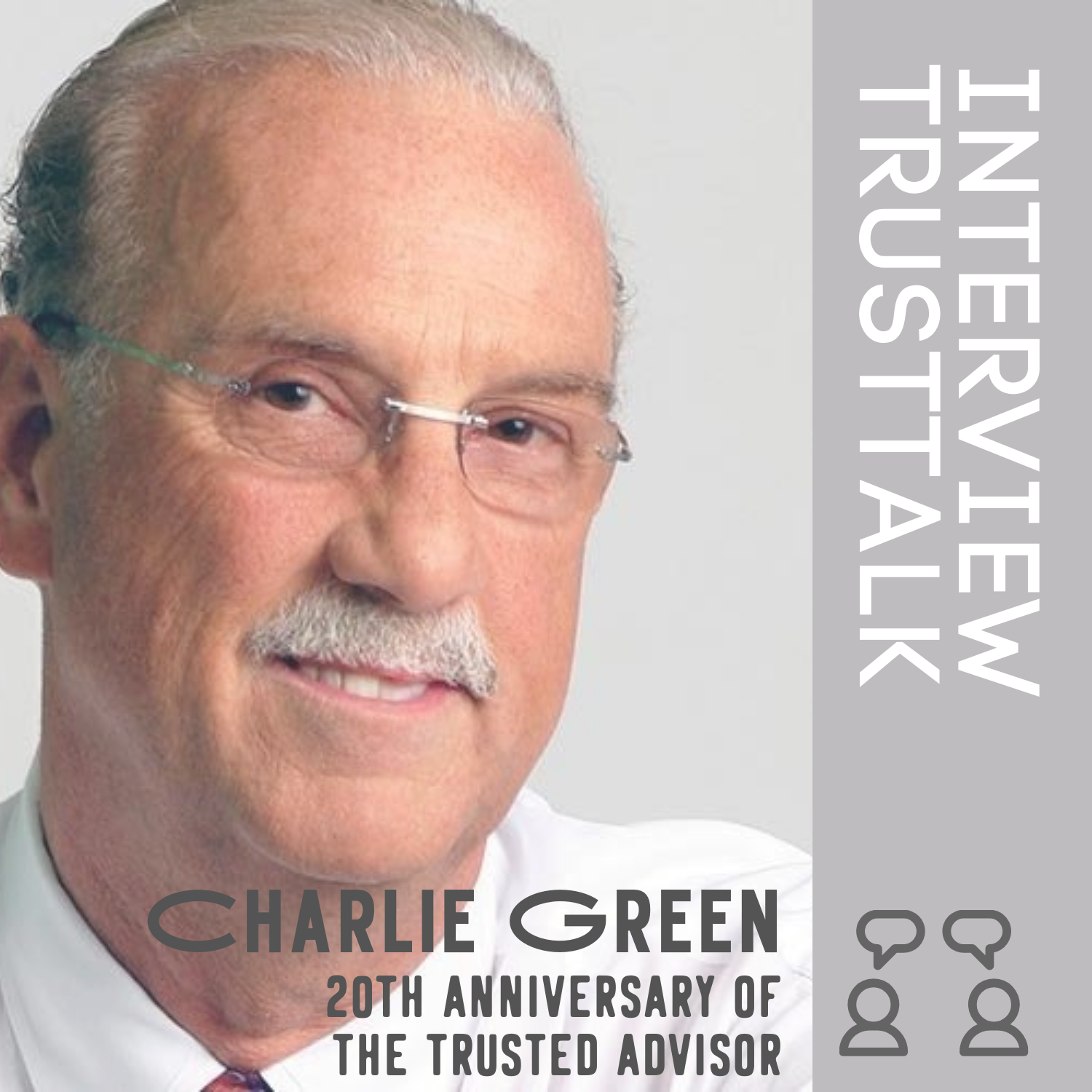 Interview with Charles H. Green, co-author of the seminal book “The Trusted Advisor” (2000). He talks about the trust paradoxes, the shift from trust as a personal attribute to reputation and branding, and whether getting a real connection is made harder using on-screen connectivity tools. He reflects on the Trust Equation which hasn’t changed over the last 20 years. Potentially the most powerful component, “intimacy” (feeling emotional security in dealing with a person) is more important than most professionals realize. He speaks about lawyers who feel more confident about sharing content than proving intimacy and the importance of listening as a profound method of trust.

About how he came to write the book:

“I had been a general management consultant for 20 years, and then I got involved. I left that and was doing some just contract training and I knew somebody in the faculty of marketing at Columbia Business School. He got involved in a joint in a long training development program for Deloitte & Touche, and they needed some consultants in addition to academics. So I got put onto that team and then like the very beginning of the project, some professor missed an airplane and the client said we have a half an hour free. Can you guys throw together something on the idea of a trusted advisor? And my partner and I said, sure, we’ll come up with something. And, you know, we did a half an hour and it went well. And he said, gee, that’s you know, can you make it an hour next time? Sure we’ll do that. And eventually became a book. And in the rear-view mirror, I realized a lot of what I had done was relevant and made sense, but I hadn’t gone looking for it, you know, was a little bit serendipitous.”

“(…) for example, business development, I think if you really explore the idea of trust, you get to the point where you say the purpose of sales is not to get the sale, it is to help the client. And if you would do that, if you behave that way, if you believe that, you end up making more sales. So it’s one of many paradoxes in the area of trust. You know the best way to sell is to stop trying to sell. Instead, serve the client. And guess what? Enough people reciprocate that you actually it’s more effective than if you were trying to tweak every little transaction and so forth.”

On interpersonal contact, in the online environment we are in due to the corona pandemic, using LinkedIn:

“There is a goldmine of interpersonal information there. All you have to do, take a few minutes and look on that LinkedIn profile before you have a phone call and say, gee, I noticed it was snowing in Amsterdam last night, really a lot. Did you get stuck in that snowstorm? How was it? Are you guys able to skate again? How exciting. You know, you’ve made it personal.”

On lawyers, wary of “intimacy” as an important way to build trust:

“Well, let me give you a quick example. You can try this with your lawyer friends. When you run into a client, a lawyer, and they say, you know, don’t give me that soft stuff. I’m a believer in data and, you know, good theory. And don’t waste time on the wishy washy stuff. You say to them, “Ah, I think I understand. What I’m hearing you say is you’re a no nonsense kind of person, right? You like just the data. You don’t want to waste time on all the silly interpersonal crap. Am I right? Is that who you are?” And they’ll say, “yes, that’s who I am.”

“Well, you just establish intimacy with them by trashing the notion of intimacy. You’ve made a connection with them. Lawyers react just like any other person. They want intimacy, they want connection just as much as anyone else, but they fostered this belief system and again, they’re not alone. This is also true of accountants and consultants, this belief in the meritocracy of purely rational thought. It’s just not true.”

Listen to the podcast! Here on this website under “podcasts” and on all major podcast platforms.

In the interview Charles Green quotes from a Bob Dylan song. More about that in an article of Charles Green which he wrote in 2006, and posted on this blog, “To live outside the law, you must be honest”.

Furthermore in the interview the mentions an article in Harvard Business Review (HBR), “Competent Jerks, Lovable Fools, and the Formation of Social Networks” by Tiziana Casciaro and Miguel Sousa Lobo (June 2005).

The Stephen Covey story about the man and the kid throwing starfish in the ocean, We are sure you know the parable, in case you are not, this is the story:

Want to read what Charles Green said in the interview? Here is the transcript, made by Sonix.ai Can unsolicited advice be trusted?