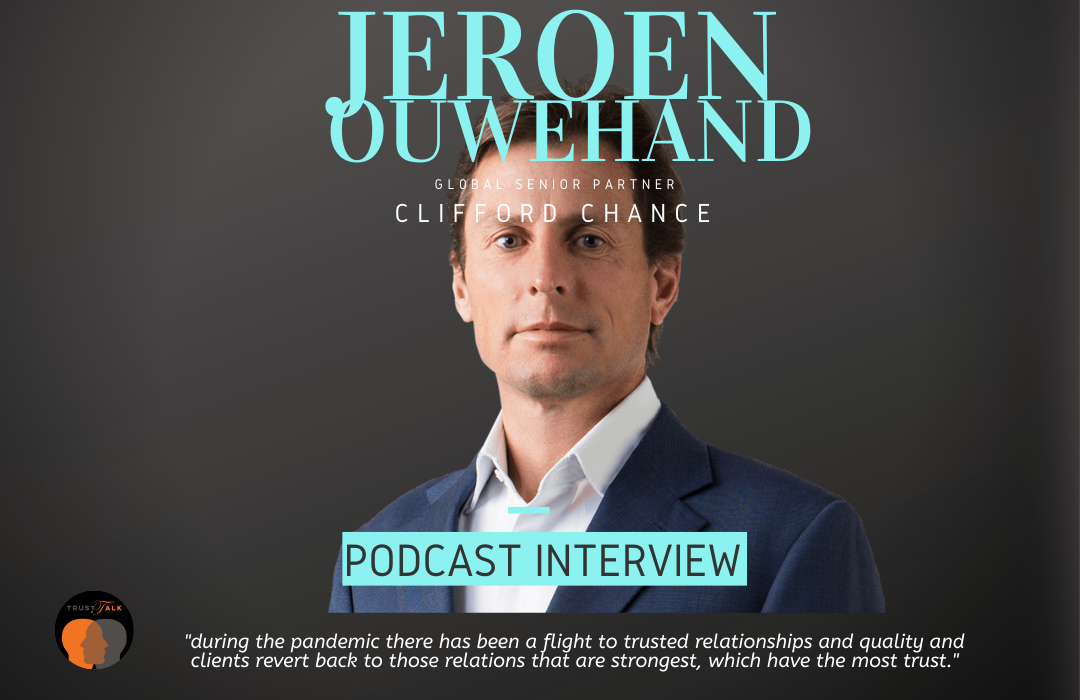 Trust, a Key Factor in a Law Firm

Episode 22 of the TrustTalk podcast is an interview with Jeroen Ouwehand. He is Global Senior Partner of the international law firm Clifford Chance. In this role, he not only represents 580 partners but also chairs the Partnership Council but he is above all the ambassador for the firm externally. The work of lawyers is all about trust, reputation, and quality. Once competing for instructions, during the pandemic there has been a flight to trusted relationships and quality and clients revert back to those relations that are strongest, which have the most trust. Trust is about being honest, about integrity, about doing the right thing when no one is watching, and about keeping promises, managing expectations, and being honest about what you can do and can’t do. Within the corporate culture Clifford Chance trust-building is essential, the firm trains legal and non-legal skills, negotiation skills, presentation skills commercial awareness skills, but also many parts of curriculums are focused on trust and interpersonal skills. Internal networking is also important. Jeroen talks about his litigation practice and the mentoring program the firm built: a reverse mentoring program whereby partners are mentored by more junior lawyers or by business professionals who have a different background. He talks about second opinions, the corporate culture where trust-building is essential, Fons Trompenaars’ high and low trust cultures, and the role of intimacy between client and the lawyer.

If people have a problem with second opinions, it’s probably an ego problem because I think it happens so often. I mean, I’ve been on the receiving end of that a number of times in the sense that, you know, a client took a second opinion on what I was advising and sometimes, indeed, upon my advice and sometimes not. Sometimes second opinions happen without the lawyer knowing about it. Sometimes clients just have someone in the background who’s giving them further advice without you knowing about it. So I think you need to be very, in a way, dare I say, laid back about that sort of thing. It’s completely normal and it’s in the best interest of the client often. So I think it’s usually ego that gets in the way if it becomes a problem. I’ve also given second opinions. For me, it’s important if you’re in a situation where someone is asked to give a second opinion or you are asked to give a second opinion to deal with it in a professional and good way. I mean, what is difficult if you get someone who is asked to give a second opinion and is just trying to use that to make him or herself look good towards that client or indeed steal that client or try and, it’s like when you’ve built a kitchen in your house and there’s something wrong and you bring in the second person who comes to look at it. And of course, they always know what the other one did wrong. You know, it’s always easy to pick on things. And I think you want to have to do that very professionally. And you’re there if you give a second opinion to not just to give the nod and say everything was fine. If there’s something that should be different, you should be able to say so. But it’s all about in the way that’s being done. And I think no lawyer should be hurt in his or her ego if a second opinion is sought. And indeed, as you say, Severin,  there are many situations where it may be advisable to tell the client to get a second opinion.

It really is about any sort of human trait that creates trust, which is about being honest. It’s about integrity. It’s about doing the right thing when no one is watching. It’s about keeping promises, managing expectations, and being honest about what you can do and can’t do. I think one of the easiest ways to lose trust is to take on a matter for which you’re not really equipped or best skilled to do so. Make sure that the matter is done by someone who is best placed to do that. All those things go to trust if something goes wrong, you know, and luckily it doesn’t happen often, but, we’re a big global firm and if ever a mistake is made or something goes wrong, be honest about it. Be open about it. Don’t try and hide it. Don’t finger point, don’t put the blame on others. All those sorts of elements go to trust, whether it’s external or internal. But they’re very important in client relations.

For the full transcript of the interview: