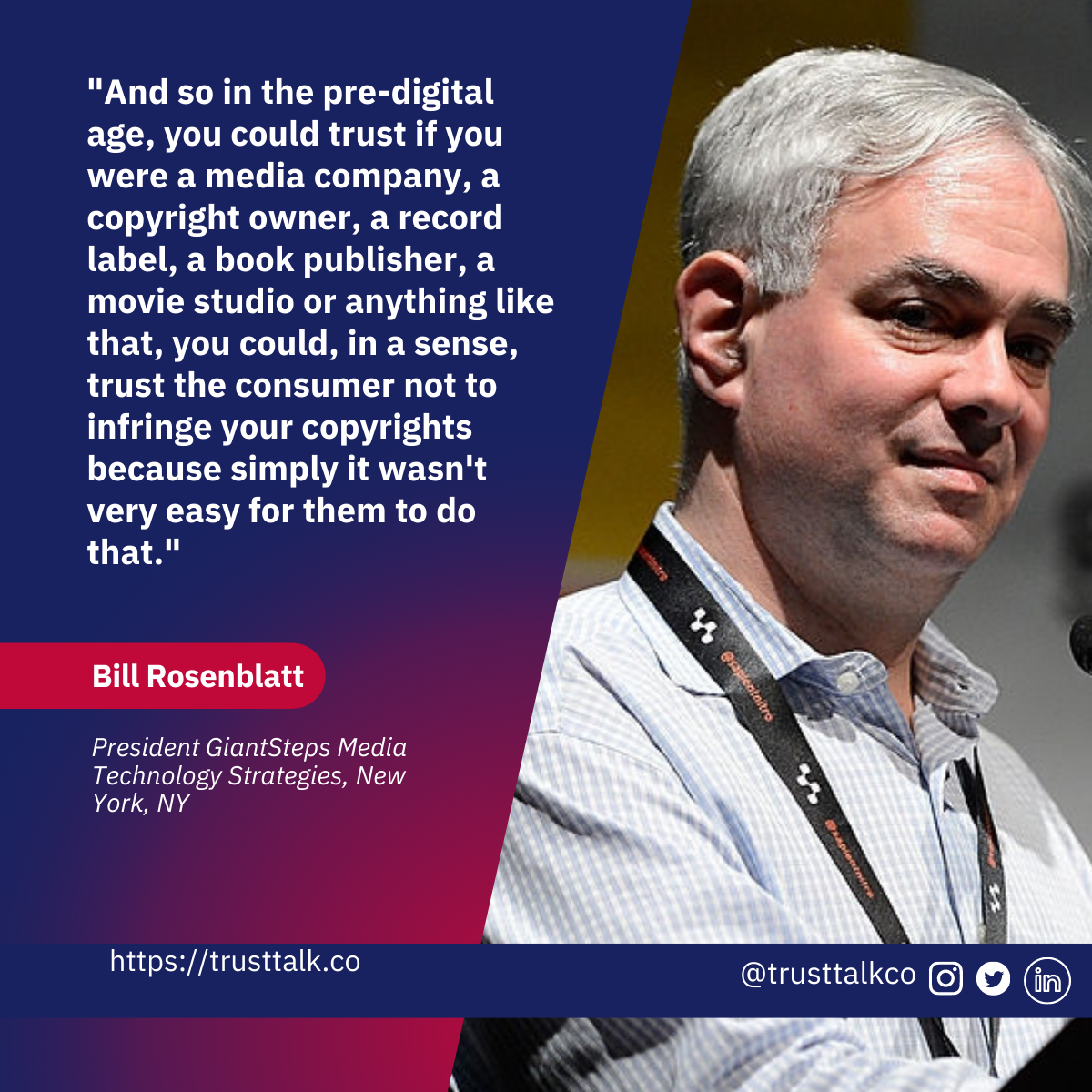 How the Digital Age Transformed Trust in Copyright

Trust becomes an issue in copyright in the digital age because it is based on an implicit understanding of the way content is copied and distributed versus how copyright could be infringed. In the pre-digital age, it is based on a foundation of trust between businesses and the amount of trust that was implied in relationships between creators and consumers.  In the digital age, every user has the ability to make virtually an infinite number of copies of creative works for almost no cost and distribute them to anyone they want in the world. And so the copyright owner no longer has this ability to obtain recourse against people who he doesn’t know and who to trust.

In this interview Bill Rosenblatt discusses the various technical means to establish that trust in digitally distributed works, from digital rights management, watermarking, financial means like levies, and other means. He reminds us of the US CASE law and the problem with legislation to solve the trust issue in dispersing digital copyrighted material.

(…) think about what copyright has meant in the pre-digital age and compare that to what copyright means in the digital age. Regarding the everyday people, consumers, if you want to call them that, who engage with media products, they buy them, they subscribe to them and so forth. And so in the pre-digital age, you could trust if you were a media company, a copyright owner, a record label, a book publisher, a movie studio or anything like that, you could, in a sense, trust the consumer not to infringe your copyrights because simply it wasn’t very easy for them to do that. It took some effort and cost to engage in activities that might be considered to be infringing. And then, on the other hand, if you’re if you are making your materials available to a business as opposed to a consumer, then you have trust issues that are bound up in licensing agreements and other contractual bases. And if your licensee or whatever it may be, is doing something that you don’t think is right, you have legal recourse. And the speed at which the entity could do something wrong is roughly equal to the speed of the legal recourse that you could have. You could sue them, you could send them a demand letter. You could do things like that. And so that was the case in the pre-digital age.

(…) But there are other technologies as well that fall in different spots along the trust spectrum. And one of them is the technology of digital watermarking. And that is instead of encrypting the content so that you have to decrypt it to get access to it, there is some invisible or inaudible piece of data embedded in the content that’s known as the digital watermark in reference to watermarked paper or watermarked currency in the past. And so the watermark can contain various types of information. Harry Potter e-books are a well-known example of this. So the organization Pottermore, which is the sort of company that manages all things Harry Potter, distributes e-books on its website that are not encrypted with DRM, but they have a watermark in them, and the watermark contains simply an ID number that no one understands the meaning of, except the Pottermore company itself, but it refers to the transaction in the user where the e-book was purchased. And there are other watermarking technologies that are less trustful of the user in the sense that they embed things like the user’s email address. That’s one example. (…)

What did the digital age change and how did that affect trust?

(…) But then something happened in the late 2000s, which is that the record labels really wanted competition to Apple. iTunes was around, iTunes had an enormous share of the digital music market and then eventually an enormous share of the music market in total, digital or otherwise. And the record labels really wanted a competitor to come in to make it so that Apple had less clout in the market. And along came Amazon. And basically they made a deal with Amazon, one prong of which was Amazon didn’t want to have to deal with DRM. They it was so much easier for them if they didn’t have to deal with it. So they agreed, the labels agreed with Amazon, OK, we’re not going to use DRM. And so they made a deal with Amazon to distribute MP3s without DRM. And so Apple followed suit quickly thereafter and dropped DRM. And then Steve Jobs wrote this public letter taking credit for removal of DRM from the music industry, which is actually a bunch of nonsense. The writing was on the wall about that for a couple of years before Steve Jobs took credit for it. But that’s what happened in music. But just to quickly wrap up on that today, of course, we don’t have downloads so much as we have streaming with companies like Spotify and Tidal and well, Apple‘s doing streaming, Google‘s doing streaming. Everybody is doing streaming. And streaming is all DRM enabled. All streaming services use DRM. So on the one hand, it’s extremely easy to use these services and they give you access to these enormous libraries of music, sometimes for free. But DRM is involved. And so there is I think that does take us back to the trust issue. Because when you’re using a service like Spotify, if there were no DRM, then you could simply download everything that you stream and do whatever you want with it and the record labels and Spotify don’t trust the customer to do that.(…)

For the full transcript of the interview with Bill Rosenblatt, see the pdf The Research Challenge of Trust