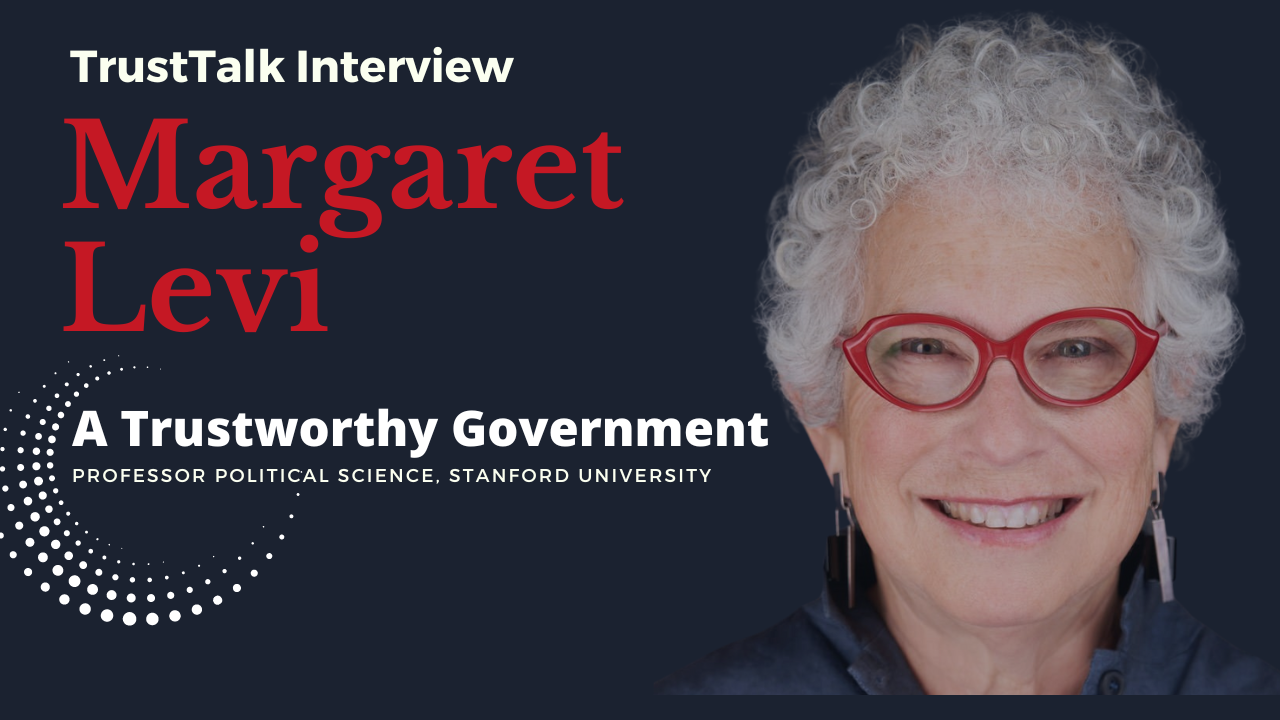 Do people still trust their government? In this 46th episode of the TrustTalk podcast Margaret Levi, professor of Political Science and Director of the Centre for Advanced Study in the Behavioural  Sciences at Stanford University talks about the ways in which citizens and governments interact and how trustworthy organizations and their leadership are in making demands -taxes to pay, to obey the law, to name a few –  and promises to its citizens (to protect) and how much confidence do citizen have that they are getting what they feel they should, in a way that they feel heard and respected? Do governments deliver what they promise?

In her book “In the Interest of Others” which she wrote with John Ahlquist, she studied transportation unions, acting like mini governments, in Australia, where members engage in costly actions that are in the interest of distant others, people that they will probably never meet. Why do people do that?

She talks about the absence of authoritative voices providing facts and news,  and how to combat misinformation spread by politicians QAnon people, and others, convinced about their own beliefs.

Princeton University Press about the book In the Interest of Others

“In the Book In the Interest of Others a new theory of organizational leadership and governance is developed to explain why some organizations expand their scope of action in ways that do not benefit their members directly. John Ahlquist and Margaret Levi document eighty years of such activism by the International Longshore and Warehouse Union in the United States and the Waterside Workers Federation in Australia. They systematically compare the ILWU and WWF to the Teamsters and the International Longshoremen’s Association, two American transport industry labor unions that actively discouraged the pursuit of political causes unrelated to their own economic interests.

Drawing on a wealth of original data, Ahlquist and Levi show how activist organizations can profoundly transform the views of members about their political efficacy and the collective actions they are willing to contemplate. They find that leaders who ask for support of projects without obvious material benefits must first demonstrate their ability to deliver the goods and services members expect. These leaders must also build governance institutions that coordinate expectations about their objectives and the behavior of members.”

About her academic work

A lot of my work really has to do with the ways in which citizens and governments interact with each other. From your earlier question, you can see where some of that motivation came from and the conditions under which citizens and later members of organizations will comply with their leadership’s demands and when they will not, when they think they’re legitimate and when they think they’re not. And so in order to understand compliance or consent, it seemed to me as I began to study the problem, that trust was a crucial piece of that story. Trust and trustworthiness. How trustworthy were the organizations and the leadership who were making the demands? And how much confidence did the citizens have that they were getting what they felt they should and in a way that they felt was appropriate in giving them respect and relatively fair. So that really was what drove it was this underlying deep question about the conditions under which people will cooperate or refuse cooperation with authorities.

In her acceptance speech of the Johann Skytte price in Uppsala, Sweden in 2019, she referred to experiences and people who influenced her. One had to do with protests, her mother took her and her sister Alice on civil rights marches in the fifties and the sixties of the last century. The other was her father who gave her the novels “The Lanny Budd” by the writer Upton Sinclair.

In the case of my father, giving me books by a man, a muckraker, a socialist muckraker, Upton Sinclair, telling the history of the relation of the US and of Europe and the rise of Nazism and the kinds of different ways in which people responded to that was, again, a reinforcement that you have to stand up to something that is wrong and that you have to have a complex and nuanced understanding of the world in order to figure out where the right leverage points are to actually make change.

References in the book

** About the question by the podcast host about the book by the economist Benjamin Ho “Why Trust Matters”,

“We were born to trust, but we were born to trust only a few. Over the centuries, we have developed the instincts and the tools and the institutions to expand our circle of trust to millions”. He argues that this long expansion of trust has been crucial to our growing prosperity and human progress. Would you feel the same way?

I wrote a piece called “Good Defenses Make Good Neighbors”, that what institutions do is they provide a setting in which we feel protected. And so we can act as if we trust others with some confidence that they will act as if they trust us. And that process does promote prosperity. It allows people to trade across immense barriers, to engage in all kinds of behaviors with some confidence that we can travel, we can put ourselves, in a sense, in places that would have been at risk centuries ago, but are not at risk now because we feel some confidence about the protections that are around us, whether it be the police or the CDC or our health authorities generally, or whatever it is that gives us some sense of security.

“We’re giving an important prize called the SAGE CASBS Prize to a social scientist who has made a big difference both in her work, but also in affecting public policy, and that’s Jennifer Richeson, who is a psychologist and is really thinking hard about the sources of beliefs about different cultures and why white supremacist beliefs might come into play at some point, why some people think whites are superior, why people of color develop the beliefs that they develop about the world, and what are the levers of change of that so that people can actually cooperate with each other and work together.”

“(…) another social psychologist who is dealing with the same problem is actually come to the conclusion that trust is possibly the key variable here and how do you build trust among people and that will help to change the ways in which they perceive each other and believe about each other and believe things about the world.”

** About her colleague Daniel Treisman:

“(…) The other one, of course, as a political scientist, is I think democracy is under serious threat and it’s been under threat before, it may well survive, as my colleague Dan Treisman suggests, but we need to understand more about what kinds of institutional arrangements we need for this day and age, as opposed to ones that were originally created in the 19th century, 18th century, and have had incremental changes as opposed to really a rethink to serve our populations today.

In the interview, Margaret Levi refers to her autobiographical essay, “The Power of Beliefs”. Here is it.

Listen to the podcast interview with Margaret:

At any of these 5 podcast platforms you can subscribe to new episodes of the TrustTalk podcast: Trust and Government by Judges