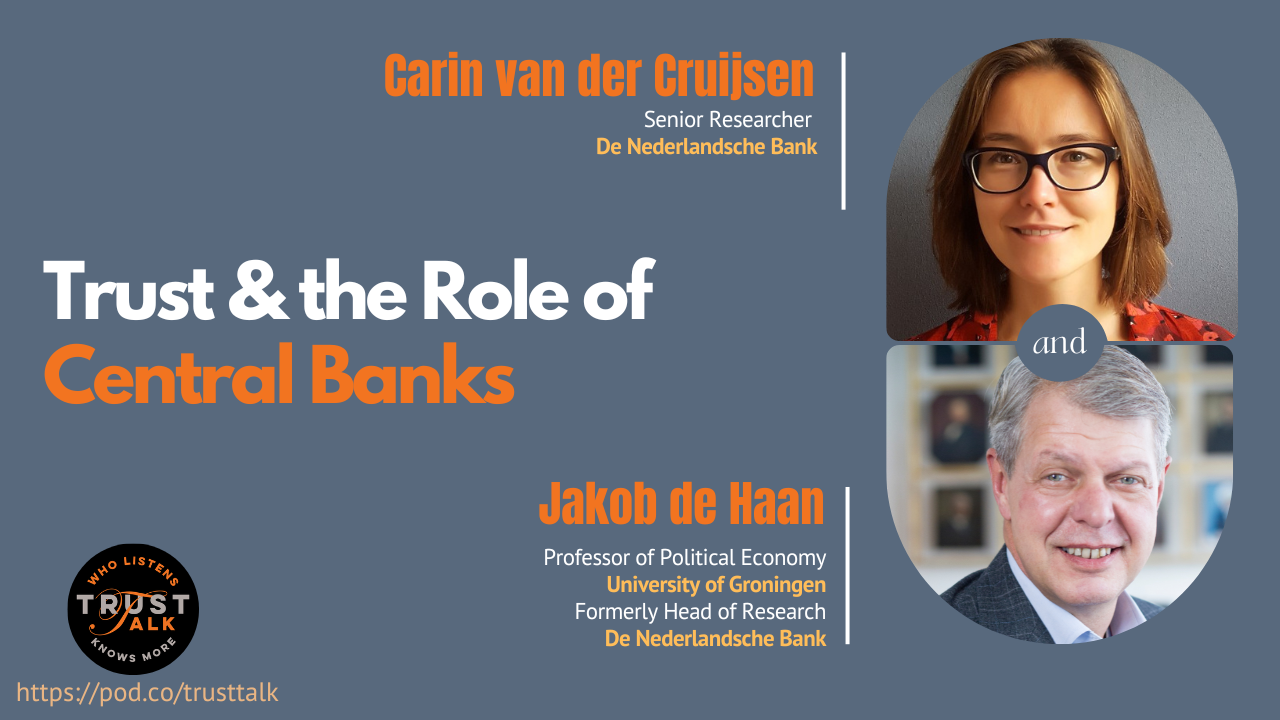 Trust and the Role of Central Banks

Trust in central banks is critical for the effectiveness of a monetary policy, and for reaching price stability. Today’s guests, Carin van der Cruijsen (senior researcher at De Nederlandsche Bank, the Central Bank of the Netherlands) and Jakob de Haan (professor of political economy at the University of Groningen, Netherlands) talk about the importance of explaining monetary policy actions to the general public, the need for financial knowledge, the relation between trust and inflation, the main driver of trust in financial institutions, and the communication sensitivity of communication by financial markets.

Price stability and independence of the Central Bank

Book details “Financial Markets and Institutions”: the book can be bought at Paagman Bookstore (for Netherlands and Belgium) or Amazon (international)

About her PhD “The Economic Impact of Central Bank Transparency”

The Ph.D by Carin van der Cruijsen can be found on the website of De Nederlandsche Bank

Transcript of the Interview

Support our podcast and gain access to the transcript of our latest interview. Please leave your name and email address below. A small donation is appreciated (but not necessary to receive access to the transcript) on https://trusttalk.co/donate. Your email will only be used for internal purposes and will not be shared for commercial activities.

On our TrustTalk YouTube channel, you can listen to the interview while reading the subtitles:

Become a Friend of TrustTalk for €50 per year, or donate

Do you like our TrustTalk show? Help us by becoming a Friend Of TrustTalk (for €50 per year), or donate whatever you like to give us. By doing so, you help us to continue to make more episodes in 2023. Go to https://trusttalk.co/friend and follow the steps.

Rather donate an amount? That is possible on https://trusttalk.co/donate. Thank you very much for your support! We greatly appreciate it. The Role of Trust in Communications