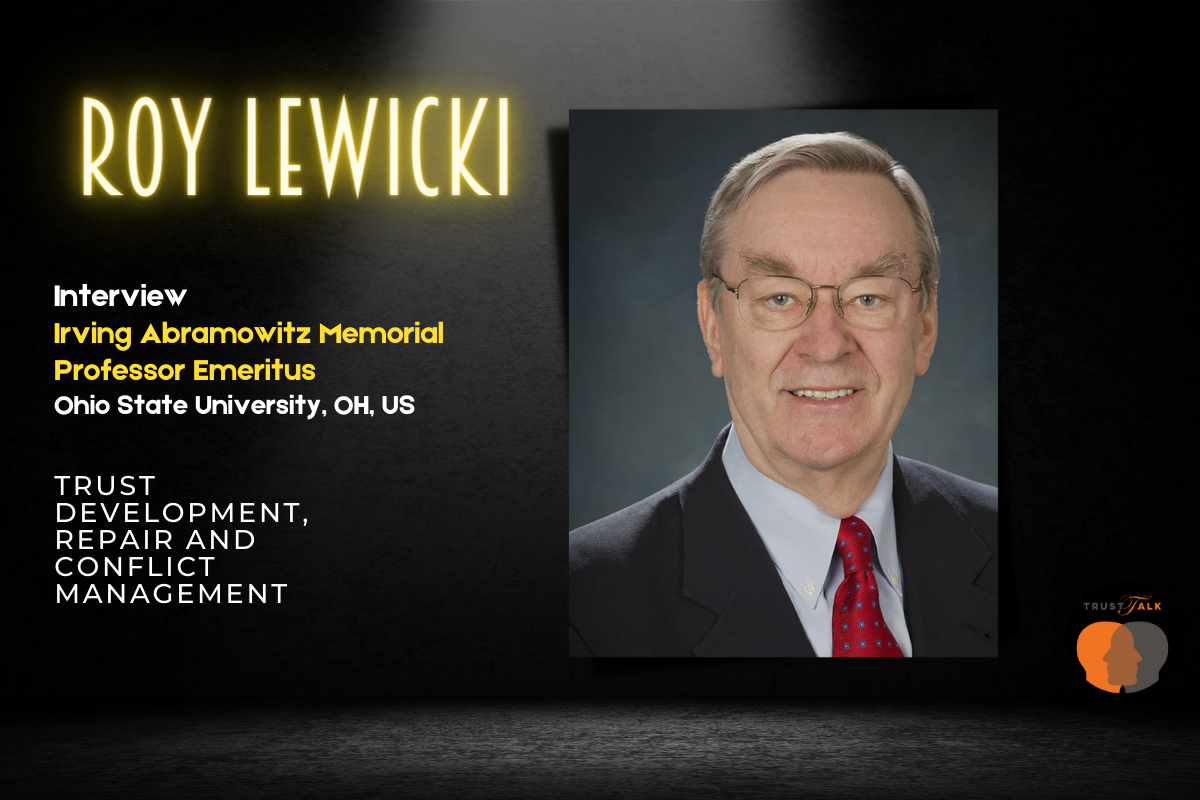 For the 35th episode of the podcast our host, Severin de Wit interviews Roy Lewicki about his lifetime research on trust. Although most of his books are on negotiations and the important role trust plays in gaining trust between the parties to a negotiation, this interview focuses on his views on trust in conflict management and the repair of broken trust.

Asked if the aphorism of this blog (“Trust takes years to build, seconds to break, and forever to repair”) is true, he says:

Well, like most aphorisms, the statement is true, sometimes. And let me take each of the three elements in that in that little statement and talk about when they’re true and not true. Trust takes years to build. Not necessarily. While some trust takes a long time to build, trust can form quickly in a variety of ways. We trust people because they’re dressed in a particular uniform. A policeman, a fireman, a physician, a nurse. So we trust them because we know that they’re acting out of a set of role or job requirements that require trust. We let we let a serviceman in to fix our refrigerator because he’s dressed in a uniform and sees and we see his truck outside with the name of the company emblazoned on it. We also build what’s called swift trust because we identify significant commonalities with that person. For example, we went to the same high school or we grew up in the same neighborhood, or we have a relative or a friend in common. So quick trust is possible and it doesn’t often doesn’t take years to build. Trust takes time to take the second piece. Trust takes second to break. Sometimes we quickly forgive a child for making a mistake, but not an adult who has promised multiple times to follow through on a commitment. Generally, the more severe the consequences of the breach, or the more dramatically the breach calls into question our own judgment about their honesty or integrity and so forth, the quicker it would be likely to break. So sometimes we forgive. Sometimes we don’t, depending on who we’re dealing with in the circumstances. And trust takes forever to repair, the third piece. That depends on a whole variety of things like number one, how big the cost was or how big the damage was done by breaking the trust. Second, it depends on the willingness of the person who broke the trust to try to make an effort at repair. And third, it depends on the mutual coordination that the parties engage in to restore the broken trust. But not all trust repair actions work because the parties are too injured or they’re unable to find ways to trust each other again. So again, the statement is true, each of the components of the statement is true. Some of the time.

The emotional element of trust

Roy Lewicki about the psychological process of trusting:

Because trust is fundamentally a psychological process or a human behavior process, and it has two components. It has a what we call a cognitive level, a brain level of sort of determining rationally determining whether the other is trustworthy or whether I should trust them. But it also has a strong emotional component to it. And psychologists essentially are best equipped to look at those elements. So while we normally look at psychologists, normally look at trust in one-on-one relationships or small groups, trust judgments can often carry over to larger entities. The people we work with doing business with certain organizations, trusting politicians who actively, by the way, abuse our trust almost every day.

The role of apologies in repairing trust

Listen to a fragment of the interview on YouTube, with subtitles where he talks about the role of apologies in repairing trust.

Professor Emeritus Lewicki wrote a number of books, mostly about negotiations, and conflict management. A selection. For the full list, see

Essentials of Negotiation: It explores the major concepts and theories of the psychology of bargaining and negotiation, and the dynamics of interpersonal and inter-group conflict and its resolution. Twelve of the 20 chapters from the main text have been included in this edition, several chapters having been condensed for this volume. Those condensed chapters have shifted from a more research-oriented focus to a more fundamental focus on issues such as critical negotiation subprocesses, multiparty negotiations, and the influence of international and cross-cultural differences on the negotiation process.

Mastering Business Negotiation: A Working Guide to Making Deals and Resolving Conflict : a resource for any leader or manager who needs practical strategies and ideas when conducting business negotiations. Grounded in solid research, the authors – experts in the field of business negotiation – reduce the huge volume of available information into an accessible handbook for busy executives who need to prepare for everyday negotiations as well as for more demanding and complex negotiation situations. Mastering Business Negotiation offers down-to-earth advice for learning to play the negotiation game and shows how to understand the game so you can better control what happens Predict the sequence of negotiation activities and move from disagreement toward agreement Identify the strategies and tactics of other players in the game. Apply the rules of the game – the “do’s and don’ts” that will ultimately lead to success.

Making Sense of Intractable Environmental Conflicts: Concepts And Cases: Despite a vast amount of effort and expertise devoted to them, many environmental conflicts have remained mired in controversy, stubbornly defying resolution. Why can some environmental problems be resolved in one locale but remain contentious in another, often carrying on for decades? What is it about certain issues or the people involved that make a conflict seemingly insoluble? Making Sense of Intractable Environmental Conflicts addresses those and related questions, examining what researchers and experts in the field characterize as “intractable” disputes-intense disputes that persist over long periods of time and cannot be resolved through consensus-building efforts or by administrative, legal, or political means. The approach focuses on the “frames” parties use to define and enact the dispute-the lenses through which they interpret and understand the conflict and critical conflict dynamics. Through analysis of interviews, news media coverage, meeting transcripts, and archival data, the contributors to the book: examine the concepts of frames, framing, and reframing, and the role that framing plays in conflicts, outline the essential characteristics of intractability and its major causes, offer case studies of eight intractable environmental conflicts, present a rich body of original interview material from affected parties, set forth recommendations for intervention that can help resolve disputes.

Within each case chapter, the authors describe the historical development and fundamental nature of the conflict and then analyze the case from the perspective of the keyframes that are integral to understanding the dynamics of the dispute. They also offer cross-case analyses of related conflicts.

The full transcript of the interview with Roy Lewicki follows here.


If you like the podcast, please follow TrustTalk on your favorite podcast platform. Hoover over this button adn you can choose your favorite channel:

Your support for our podcast means a lot to us, a small donation helps us to produce more episodes. On this page, you can find a safe and quick way to donate: https://www.trusttalk.co/donate Trust in Negotiations and Dispute Resolution